The Conservation Column
By Juliet Grable

The annual Oregon Audubon Council (OAC) Conservation Meeting was a great success. Twenty-one members from chapters around the state attended the meeting, which was hosted at the Green Springs Inn on the weekend of October 12-14.

During the day-long Saturday meeting we reviewed the 2018 Conservation Priorities, identifying are-as where we made progress and those where we did not meet our goals. We then used this discussion as a basis for identifying new priorities and deciding which we would carry over from 2018.

One of the highlights of the afternoon was a presentation by Teresa Wicks, who is the Eastern Oregon Field Coordinator based in Burns, Oregon, near Malheur National Wildlife Refuge. The Audubon Society of Portland hired Teresa to fill the gap after Malheur lost all of its biological field staff after the occupation of the refuge in early 2016. Teresa conducts biological surveys as part of the Comprehensive Conservation Plan for the refuge; she also coordinates work parties and leads bird walks (both at the refuge and closer to town) as part of her outreach effort. She is working to engage kids from the Paiute Tribe and leads field trips every Friday. She also participates in the collaborative water-sharing plan which includes four working groups. One of her goals is to plan tours that will appeal to a wider range of people and to involve people in community science projects. She is also looking for ways to engage Audubon chapters and is eager to host tours for chapters who plan a trip to Malheur. (I think this is a fantastic opportunity and would like to organize such a trip. Please contact me if you’re interested.) You can also learn more about Teresa’s work at Malheur by following the Restore Malheur Facebook page. 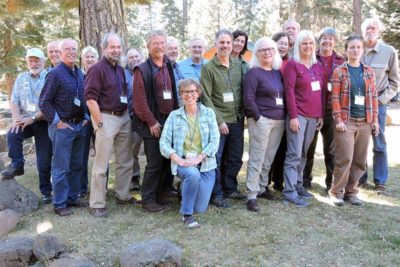 Hosting the event at the Green Springs Inn enabled us to introduce attendees to the Cascade-Siskiyou National Monument. Pepper Trail gave an informative presentation on Saturday night, during which he described the unique geological conditions which gave rise to the region’s outstanding biological diversity. He also described current threats to the region, including Secretary of Interior Ryan Zinke’s attempt to roll back the Monument Expansion and the Griffin Half Moon Timber Sale proposed for several tracts north and northeast of Howard Prairie Lake.

On Sunday, Pepper led two field trips. At 7:00 am, we caravanned from the Inn to the lakes in search of Great Gray Owls. One graced us with its presence on our first stop, in one of the meadows between Hyatt and Howard Prairie Lakes. This was a first for several birders. We also saw Golden and Bald Eagles and a surprising range of waterbirds at Howard Prairie Lake.

After breakfast, Pepper led us on a hike on the Greensprings Mountain Loop, which includes a short section of the Pacific Crest Trail. The trail winds through a mature mixed conifer forest then opens up to oak savannah on the west and southwest flanks, affording fantastic views of the Bear Creek Valley and the Siskiyous. It was cool and quite windy, so the birds were quiet, but it was a great chance to orient visitors in the Monument and share some of the natural history of the area.

In between activities, RVAS hosted “socials” on Friday and Saturday evenings at one of the cabins. Many thanks to Carol Mockridge and George Peterson for setting up on Friday, and kudos to Carol for providing tasty snacks and beverages and for being such a gracious host.