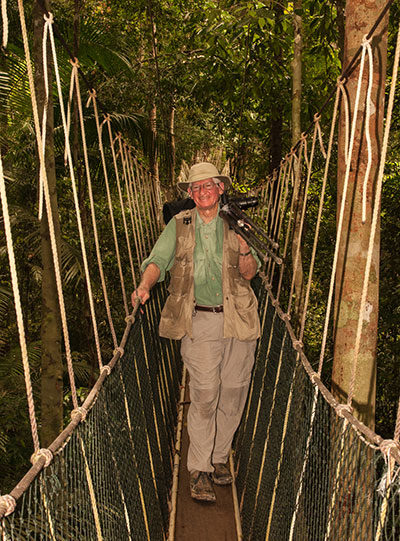 As a small boy Richard E “Jim” James moved from Montana to Oregon with his family in the early 1940’s and was brought up on the Oregon coast and the Rogue Valley where he and his wife, Valerie, raised their four children. Except for a number of years spent in many Western and Midwestern states as well as Alaska, while he was in the Air Force and in medical training as a physician and orthopedic surgeon, Jim has lived in Oregon most of his life. Jim spent most of his time as a boy fishing, hunting, hiking, and observing animals in the wilderness and later working summers in the woods while attending high school, college, and medical school.

Fifty years ago while in the Air Force, he and his family moved to Alaska and it was there, living in one of the last great wilderness areas in North America, that he first became seriously interested in nature photography. He continued to develop a keen interest in wildlife photography, which has become a serious passion over the past 20 years. He switched from slide film to digital about eight years ago. Except for occasional minimal digital enhancement, Jim does not digitally engineer his images.

Now retired, Jim spends his free time with his family and eight grandchildren as well as photo-graphing wildlife throughout the world. He hopes to bring a better understanding and enjoyment of some of God’s most unique and beautiful creatures to others through his pictures.