Happy fall! This might be the last Chat that reaches you before Election Day (November 8, but most of us vote well before that). So, let me remind everyone that one of the most important conservation actions you can take is to VOTE. Rogue Valley Audubon of course does not endorse candidates, but I urge you to examine the environmental platforms of all candidates, from County Commissioners to Senators and the Governor. An excellent source of information is the Oregon League of Conservation Voters. Their endorsements can be found here:
https://www.olcv.org/2022-general-election-endorsements/.

The Klamath Basin Refuges: From Bad to Worse
I have received several questions recently about conditions in the Klamath Basin, so here is an update. I am afraid that the news is all bad. This information is taken from a briefing provided by the Refuge managers, which can be seen in its entirety at: https://www.fws.gov/sites/default/files/documents/KBNWR%202022%20habitat%20condtions_508.pdf
The Klamath Basin is entering a third year of severe drought and water shortages. Habitat conditions are the worst they have ever been.
• National Wildlife Refuges in the Klamath Basin continue to face the greatest threats they have experienced since the 1920’s. Waterbird populations are not only the lowest in the refuge’s history but importantly Klamath Basin-wide, indicating a collapse of the most important staging area in the Pacific Flyway.
• Drought conditions are impacting everyone – Klamath basin wetlands, waterbirds, fish, and communities (Tribes, conservation, recreation, agriculture) are all suffering due to the challenges around water availability and delivery.
• The Klamath Basin is losing wetlands at a rapid rate, including both the physical loss of acres and functional loss of flooded habitat.
• The Klamath Basin is not alone! Drought conditions are plaguing the western Unit-ed States and at this time there is concern that little wetland habitat will be available to support fall staging and wintering water-birds in the Pacific Flyway.
• The refuge’s goal is to increase the stag-ing population of migrating waterfowl on LKNWR and TLNWR.
• Refuge staff want to increase the value of these refuges throughout the year with special consideration on increasing water-bird populations during the spring breed-ing and fall migration months.
• Beginning September 17, 2022, and continuing through March 10, 2023, Tule Lake and Lower Klamath National Wildlife Refuges will be closed to all public upland game bird and waterfowl hunting.
• The decision to close the hunt season was based on the ongoing and severe drought conditions and lack of available habitat, including food, water and shelter, to support upland game and migratory water birds.
Here is the summary of fall-migration duck numbers at Tule Lake since the 1940s: 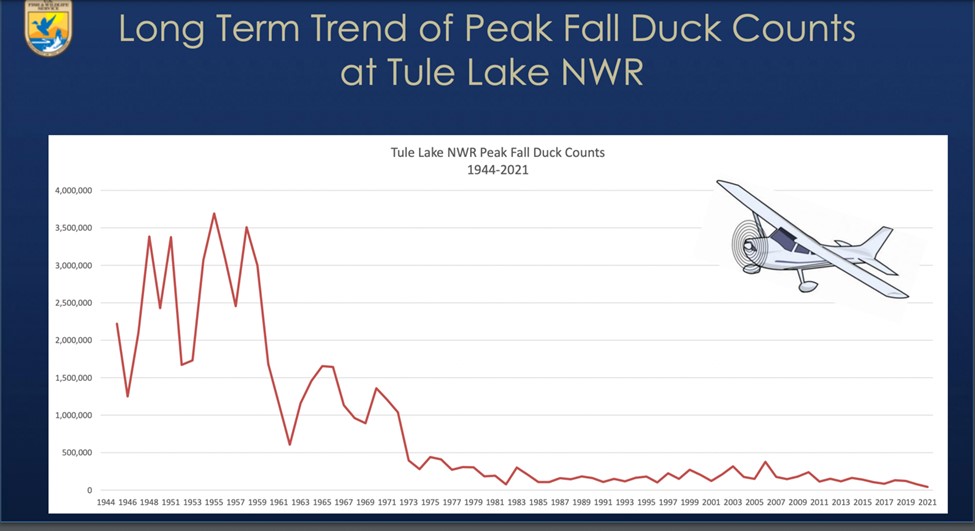 Unfortunately, there are no obvious solutions to this tragic situation. The ultimate and intractable cause is the ongoing drought, which is general across much of the West, and appears clearly related to climate change. But unquestionably the water crisis in the Klamath Basin Refuges is made worse by the current Bureau of Reclamation “biological opinion,” which prioritizes water deliveries to Upper Klamath Lake (for endangered suckers), the Klamath River (for endangered salmon), and irrigated agriculture – leaving the refuges with no water at all. For more discus-sion of this, see my article for Audubon this spring, at https://www.audubon.org/news/the-klamath-basins-water-crisis-growing-disaster-waterfowl.

If solutions are to be found for this and many other pressing environmental crises, we need political leaders who prioritize environmental health, respect science, and recognize climate change as an existential threat. So, please – VOTE!