By now, everyone should have received their ballots in the mail. Please, remember to VOTE! It’s one of the most important things you can do to make your voice heard for conservation – and for all the other issues you care about.
This Conservation Column features a local conservation victory, and a national warning on the state of the birds. First, the good news, from a KS Wild press release.

Old Growth Logging Stopped
In early October, a judge in the District Court for the District of Oregon ruled that the U.S. Fish and Wildlife Service (Service) justification for Bureau of Land Management (Bureau) timber sales totaling nearly 18,000 acres including in old growth forest violated the Endangered Species Act. The judge ruled against the Service’s claim that old-growth logging in the Poor Windy and Evans Creek timber sales on 15,848 acres of threatened northern spotted owl habitat would not harm the imperiled bird species.
“While we are pleased with this result, it goes to show how emboldened our public land managers have become in pur-suing the almighty board-foot, that they are willing to tell the American people and a federal judge that logging thou-sands of acres of habitat occupied by a threatened species like the northern spotted owl will cause zero ‘harm,’” said Sangye Ince-Johannsen, attorney at the Western Environ-mental Law Center. “The agencies’ singular focus on extraction over stewardship should concern every Oregonian, but today I’m grateful the law forbids that in some cases.”
“This ruling should serve as a wake-up call to the BLM,” said George Sexton, conservation director for KS Wild. “It’s time for the BLM to work with stakeholders to thin second-growth timber plantations to reduce fire hazard instead of chasing around controversial old-growth timber sales in the backcountry.”
Judge Aiken also found that the Bureau and the Service illegally failed to consult on the effects of the East Evans Creek and Milepost 97 wildfires that actively burned the timber sale area as the Service concluded its evaluation. The Milepost 97 fire burned 4,706 acres of northern spotted owl habitat and reduced canopy closure below 40% in a narrow but vitally important east-west habitat bridge.
“These are fire-prone, dry areas, and we opposed this massive logging project because it would increase fire risks and hazards for the surrounding community,” said Nick Cady with Cascadia Wildlands. “The agencies keep pushing logging projects that are putting our communities at risk, and it is past time that fire impacts drive our land manage-ment decisions, especially on public lands.”
Finally, Judge Aiken faulted the agencies for failing to analyze the effect of habitat loss resulting from these logging projects on the competitive interactions between the Barred and Spotted Owl.
Judge Aiken wrote that the Service “was not faced with scientific uncertainty, but unanimity concerning the negative impact of reduced [nesting, roosting, and foraging] habitat and the barred owls’ threat to the spotted owl based on the barred owls’ ability to out-compete for food and shelter … In offering an explanation counter to the evidence af-ter considering important aspects of the problem, [the Service] ultimately minimized the effect of the action and its conclusions are not supported by the evidence.”
“The agencies need to recognize that when two territorial species are competing for the same rare old-growth habitat, any reduction of habitat from logging will increase the chances of extinction.” said Doug Heiken of Oregon Wild.

The State of the Birds…Is Bad
Next, the sobering news contained in the newly released State of the Birds report for the United States. Data show birds in the United States are declining in almost all habitat types —forests, grasslands, deserts, and oceans. The only bit of good news is for waterfowl, which show strong increases due to investments in wetland conservation that have improved conditions for birds and people. Published by 33 leading science and conservation organizations and agencies, the 2022 U.S. State of the Birds re-port is the first look at the nation’s birds since a landmark 2019 study showed the loss of 3 billion birds in the Unit-ed States and Canada in 50 years.
Findings included in the report:
• More than half of U.S. bird species are declining.
• U.S. grassland birds are among the fastest declining with a 34% loss since 1970.
• Waterbirds and ducks in the U.S. have increased by 18% and 34% respectively during the same period. 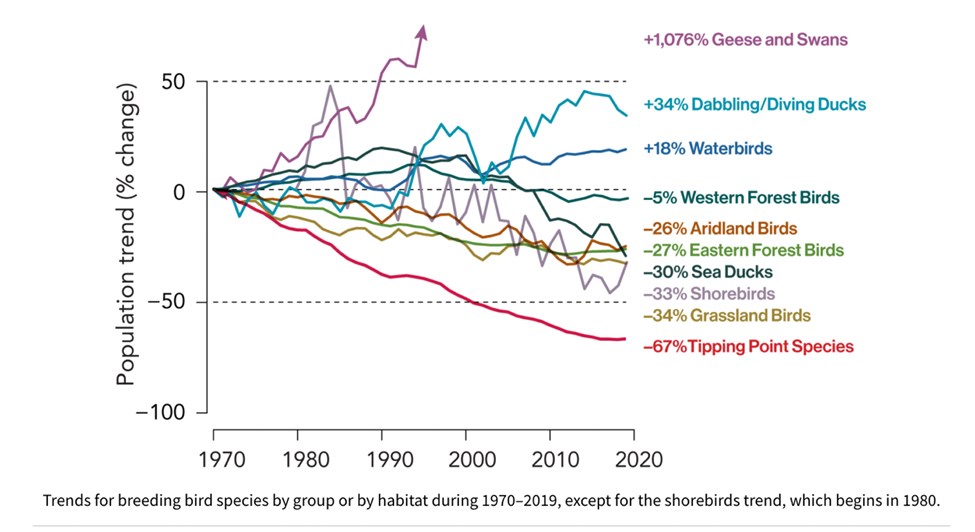 Seventy newly identified Tipping Point species have each lost 50% or more of their populations in the past 50 years, and are on a track to lose another half in the next 50 years if nothing changes. Fortunately, relatively few Oregon birds are on the list of “Tipping Point Species,” but it does include Greater Sage-Grouse, Pinyon Jay, Tricolored Blackbird, and both Rufous and Allen’s Hummingbirds.
“What affects birds affects us, and birds are telling us they are in trouble. The State of the Birds Report underscores both the serious threats facing birds as well as opportunities to forge solutions that will benefit birds and the places they need. It also shows that what’s good for birds is good for people when it comes to addressing threats like cli-mate change. Ensuring healthy landscapes across our forests, grasslands, wetlands, and more will help protect birds and people alike by storing carbon, providing essential habitat, and building more climate-resilient communi-ties,” said Marshall Johnson, chief conservation officer for the National Audubon Society.
“The rapid declines in birds signal the intensifying stresses that wildlife and people alike are experiencing around the world because of habitat loss, environmental degradation and extreme climate events,” said Dr. Amanda Rode-wald, director of the Cornell Lab of Ornithology’s Center for Avian Population Studies. “Taking action to bring birds back delivers a cascade of benefits that improve climate resilience and quality of life for people. When we restore forests, for example, we sequester carbon, reduce fire intensity, and create habitat for plants and animals. By greening cities, we provide heat relief, increase access to recreation, and create refuge for migrating birds.
Given widespread declines, the report emphasizes the need for proactive conservation across habitats and species.
“Despite best hopes and efforts, 70 Tipping Point bird species have a half life of just 50 years–meaning they will lose half their already dwindling populations in the next 50 years unless we take action,” said Dr. Peter Marra, direc-tor of The Earth Commons—Georgetown University’s Institute for Environment & Sustainability. “What we’ve out-lined in this State of the Birds is a recipe for how conservation biologists can work with communities and use surgi-cal precision to solve environmental problems—blending new technology and data to pinpoint the cause of losses and to reverse declines while we still have the best chance—now, before more birds plummet to endangered.”
The report advises that meeting the tremendous need will require a strategic combination of partnerships, incen-tives, science-based solutions, and the will to dramatically scale up conservation efforts.
“Everyone can make a difference to help turn declines around,” said Mike Parr, president of American Bird Conservancy. “Everyone with a window can use simple solutions to prevent collisions. Everyone can help green their neigh-borhood and avoid using pesticides that harm birds. Everyone who lives in a neighborhood can bring the issues and solutions to their community and use their voice to take action.”